Last night Leigh and I drove up to Austin to attend a fundraiser for the Comic Book Legal Defense Fund. The CBLDF helps protect the first amendment rights of comic books creators who don’t have the financial means to incur the legal costs which censorship battles usually require. You can read more about them here.

The guest of honor was Terry Moore, creator of the comic “Strangers in Paradise.” In a medium saturated by hugely muscled men and gravity defying women SIP truly stands alone. 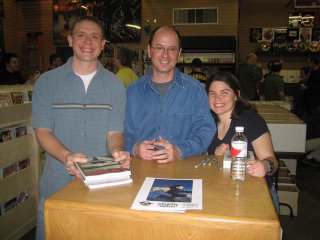 You’ll find neither capes nor cowls in the pages of SIP, but you will find a heart-felt story about three characters so lifelike and believable that you may be tempted to look them up in the phone directory. You can visit Terry’s website here.

Less than 300 people were invited to the fundraiser, and because of the intimate setting we had the good fortune to actually be able to visit with Terry for quite a while. I brought my tattered copy of the first SIP graphic novel and Terry seemed amazed to see it and quite happy to sign it (the edition I have has been out of print for some time).

We spent a good deal of time talking to Terry about the actual process of writing, which if you haven’t noticed is a subject that I find fascinating. Terry spoke about finding the zone when you write, when nothing else seems to matter or even exist, and you are able to achieve prodigious amounts of work with little to no effort. We also discussed the times when you feel like digging the Grand Canyon with a salad fork would probably be easier than squeezing out one more intelligible sentence. I seem to experience the latter more frequently than Terry. 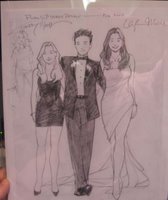 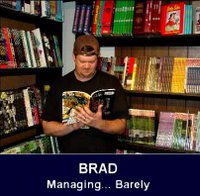 The CBLDF held the event at Austin Books. If you ever visit Austin make sure you go by and check out the store. I’ve never been to a comic book store with a larger section of backstock. If you’re missing an issue of a book odds are good that they have it. That’s Brad Bankston in the photo. Brad’s the owner and manager of Austin Books, and I’ve known him and his family for close to twenty years. His brother Brent Bankston owns and manages Bankston’s in Waco, a smaller but much nearer to my heart, version of Austin books. All of my comics come from Bankston’s and they always will. If you’re ever in either store tell’em Mark said “hi.”