Games To Pass the Time and Maintain Sanity

As my M.A. exam looms closer and closer I’ve discovered that my attention span has begun to get shorter and shorter, so that I have to take longer breaks at more frequent intervals. I’ve also found that playing video games during my breaks helps to alleviate some of the stress and makes it easier to study. I’m sure you’re curious as to what video games I like to play, aren’t you? Sure you are.

You probably think that a techno-nerd like me would choose games which would take full advantage of the powerful computer I built for myself; games which require massive amounts of memory and CPU power and which will only render video properly with a state of the art video card. 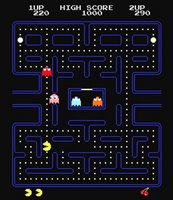 Man”¦you have no idea how wrong you are. Here’s the kind of game that keeps me occupied for hours upon hours. Pathetic, no?

The other game that I play regularly? Pac-Man. And not on the computer either; I’ve got it downloaded on my cell phone.

Speaking of games, several weeks ago I found a remake of the NES classic “Duck Hunt.” Someone rewrote the game, and instead using the wimpy, standard gun the game came with the programmers melded “Duck Hunt” with “Doom” so that now you can use the weapons from “Doom” to hunt the ducks. You have no idea the level of satisfaction you’ll feel when you waste a duck using the BFG. And even more satisfying is that if you choose fists as your weapons you can punch the snickering and condescending dog. You can download “Duck Doom” here.

One thought on “Games To Pass the Time and Maintain Sanity”