I’ve spoken before about the inherent nerdiness of bloggers, and a story today reminded me just how much we nerds hold it against one of our own if they try to ascend the social ladder.

For the past three days blogger “Dawn Yang” has been one of the most talked about people on the blogs. Technorati, the blog aggregator I use frequently, even lists her as a more popular blog subject than President Bush. The reason bloggers have been talking about her? She had plastic surgery and now she doesn’t look like a nerd anymore…and no that’s not a joke. Go here and here for succinct summaries and go here for Dawn Yang’s personal blog.

Millions of bloggers are really, really pissed off that Dawn Yang said she didn’t have plastic surgery when pictures of her prove otherwise. You don’t have to be a plastic surgeon to see that this girl went under the knife: 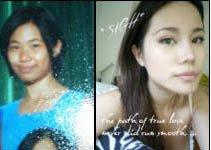 My take on this? Nerds are a catty bunch and they don’t like to see other nerds hanging with the popular kids. Apparently, Singapore wanted to use Ms. Yang as a national spokesperson which I guess would have granted her opportunities not readily available to the millions of bloggers who post from their parent’s basement. This did not sit well with this group of nerds, so they began to do some research on Ms. Yang and found photos on the web which prove her face and body have changed in ways that nature lacks the ability to accomplish. All the Cheetos eatin’. Mountain Dew drinkin’ net nerds who weigh fifty pounds over their recommended weight couldn’t sit back and let one of their brethren go off and get all hot, so they began to act like catty little school children after they uncovered the nefarious actions of Ms. Yang.

So what if this girl had plastic surgery? If I had the time and the money there are several things I’d love to get fixed. And yes, I’d lie about it too”¦more power to her. Folks need to calm down about this. How many women do you know who would readily admit to wearing a push-up bra if asked? Or how many guys do you know who would lie when asked if they stuff the crotch of their jeans? The ones who lie about plastic surgery aren’t the ones you should be worrying about. It’s the ones who flaunt it who need the help.