Since Valentine’s Day looms precariously close I think a post about gender relations is in order. I’d like to begin with a generally accepted “truth” and work from there.

Men are better drivers than women.

This stereotype/clichÃ© interests me. For one thing an ounce of truth hides somewhere buried in every clichÃ©, and for another I’m curious as to why we accept notions such as this as a result of nature as opposed to the results of nurturing.

By all rights women should be far better drivers than men: they have reflexes superior to men; on average they have better eyesight; studies have shown they excel at eye/hand coordination in a way men do not. And whether it’s true or not, somewhere along the way women have gotten the reputation as intrinsically bad drivers. I don’t believe that. Here’s my theory:

Boys are encouraged from a very young age to show an interest in cars, and not just cars in general but fast cars that drive dangerously and jump riverbeds to lose the obligatory bear. Fathers expect that their son will experiment with the car because they did the same thing when they were young. Do parents know that their son practices power-breaking, power-sliding, double-clutching, speed-shifting, and drag racing quarters? Probably, but as long as the car comes back in one piece and the boy doesn’t brag about his driving exploits they usually don’t make a big deal out of it, because as we all know boys will be boys.

On the other hand girls usually don’t experience driving the same way that boys do (I’m working from anecdotal evidence here, so female readers please comment if I’m wildly incorrect). Sure they take the same driver’s ed that the boys do, but I’m assuming they don’t go out and “see what mom’s car can do” the same way guys do.

They don’t intentionally slide a car around a corner, they don’t purposefully see if they can jump the station wagon, and they sure as hell don’t dare one another to cut donuts on a deserted road at midnight on a Saturday. As soon as they start dating societal conventions pretty much dictate that the boy drives, so from the very instant that girls begin to mingle with boys in a courting atmosphere our culture teaches them that guys do the driving.

Now fast-forward several decades. While driving along the highway an accident becomes imminent. 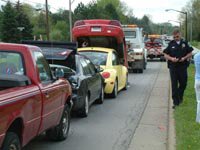 Motorists slam on their brakes and our car must quickly deal with the situation, and to make matters worse our car must swerve into the median to avoid rear-ending another car. Those late night dare-sessions from his childhood come in handy for the boy because in the past he’s intentionally driven a car much more dangerously than the accident demands. Conversely, the girl who has always driven correctly and never broken any of the rules of the road is suddenly facing a situation that she’s never had to deal with.

I think we do girls a great disservice by our gender encoding, at least in this example. Our culture expects boys to like fast cars and dangerous driving, but it considers those same attributes as unacceptable and “unlady-like” for girls. Unfortunately that leaves girls ill-equipped to deal with certain situations when they arise simply because our culture arbitrarily identifies certain activities and interests as gender-specific.

We should pay more attention to how we shape our notions of gender instead of assuming that all aspects of gender and gender relations are instilled in us on a genetic level. 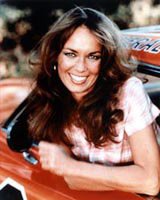 I want my future daughter to grow up like Daisy Duke, and not the faux-Daisy in the new Dukes of Hazzard, but the real Daisy as played by Catherine Bach. Sure, she was a beautiful and feminine woman, but she could take care of herself in dangerous situations, and when she had to she could drive the General better than either one of her cousins.

And that’s the way it oughta be.