Yesterday in Nebraska seven people collected last week’s powerball lottery jackpot of $365 million dollars. They all work together in a meatpacking plant and every week they form a pool and buy a lottery ticket for the group. This week they finally won, and after taxes each person will receive the lump sum of $15.5 million.

According to this article from CNN the group designated one man, Dung Tran, to hold the ticket and check the numbers last Saturday night. The writer of the article states:

“Tran said he first learned they won Saturday around 10:30 p.m., and he immediately called up his colleagues but got through to no one. ”˜Everybody was sleeping,’ he said.”

I’m having trouble just imagining the terrible burden of temptation Mr. Tran must have fought after he found out they won, and before he told anyone. Good lord, I don’t have enough will-power to restrain myself from eating a slice of pepperoni pizza while returning from a pizza run, much less voluntarily hand over $93 million to a buncha people I work with.

Kudos to Mr. Tran. I betcha no one makes fun of his unfortunate first name now. 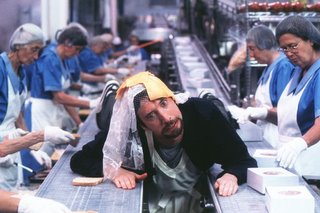 I also love the portion of this article which reveals that only three out of the seven winners quit their job at the meatpacking plant where they typically work more than sixty hours a week on the overnight shift. Personally, I think they’re staying on the payroll just to have some fun. Just hang around and become the monkey in the wrench”¦the fly in the ointment”¦the pain in the ass. Next week they’ll all be wearing “meat-hats” instead of those silly hair nets, and riding around on the conveyor belts while whistling “Surfin’ USA.”

Come to think of it, if I won the lottery the first thing on my “To Do” list would be to apply for a really shitty job like at McDonald’s, or as a garbage man, or a movie theater usher. I could mix up orders and eat hot apple pies all day, rifle through people’s trash and roll bowling balls down alleyways, and watch free movies and punch loudmouths in the face.

The second thing on my list? That’s easy. Retain a lawyer to protect me from litigation resulting from negligent behavior on my jobs. As a wealthy and fancy man I wouldn’t want anyone nagging me with legal niceties.