As I spent most of the weekend drowning in a deluge of my own mucus (you’re welcome for that), I didn’t spend much time sitting in front of the computer. Not because of my flu symptoms, but because I don’t weather medication very well and I didn’t trust myself not to lapse into a coma while staring at the monitor.

I never have to worry about becoming addicted to any type of drug because I have the tolerance threshold of an infant as far as drugs are concerned. Once as a teenager I took four Benadryl instead of the recommended two, and I slept for twenty-four hours straight, only waking to go to the bathroom and eat. My mother almost took me to the emergency room.

Last Thursday my link dump included a link to a Photoshop contest wherein contestants were asked to merge two movies and to create a movie poster of the amalgamation. That link inspired Anniina, the Mischievous Muse, to create some mashup movie posters of her own which she posted on her blog. Go here to see them.

As if that weren’t impressive enough, Anniina also ”˜shopped Jesus out of his clothes in Raphael’s masterpiece “The Transfiguration.” Here’s the before and after: 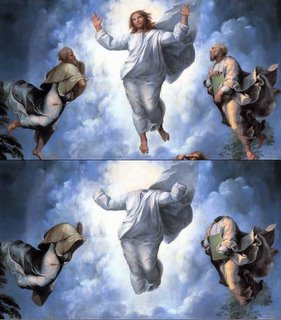 Go here to view them on the original post.

Okay, I admit that’s some pretty damn good work. But can Anniia accomplish something as divine, something as awe-inspiring as my chef-d’oeuvre “Mark with Fiddy’s Body?” (Cue “O Fortuna!”): 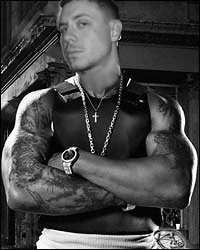 I feel my honor as a ”˜shop artist has been impugned! I know when I’m being mocked and I throw down the gauntlet, madam! A challenge has been issued and I eagerly accept! Three days hence a photoshopped image so craptastic, so shockingly spectacular in its insipidness will appear here on Hyperliterature in an effort to redeem my honor…what little of it I have anyway.